World Heritage City (Unesco) = Regensburg. Also the most northerly city on the Danube which reflects it,s significance as a Roman holding. We enjoyed a day off the bikes to explore the city – witnessing and hearing about multiple eras throughout history. St. Peter,s cathedral took 600 years to build. Had sausages at the oldest sausage canteen in Germany. Sat at another beer garden by the river as the evening grew. Michaela got to feel like a girl for a day -no sweaty bike clothes, and even got her nails done.

King Ludwig I = bit of a nut! (Aren,t they all??). He definitely had an edifice complex -2 of the most well-known we saw on our travels – Liberty Hall in Kelheim (involving a very steep walk up the hill), and Walhalla ( which we enjoyed from below). Mostly, he is credited with uniting the various Teutonic “tribes” to lay the foundation for a nation of Germany. He defeated the Napoleonic war in early 1800’s, and his influence goes beyond the region of Bavaria for which his name stands.

Oops = walking into the largest summer festival in Eastern Bavaria ( in Straubing). We first thought it was like a PNE but the revellers were there in droves, all dressed in their lederhosen & dirndls, and at various stages of merry-making and inebriation. After a quick break, as it was still early, we decided to cycle another 12 km to a town called Bogen. Unfortunately, there were no rooms available in any inns, and a thunderstorm was about to erupt. The next stop would have been another 30 km onward and it was too late. So…we took the train back to Staubing, thinking we could find a room in a bigger town, at which time we realized that this summer fair (think Oktoberfest in August) was a really, really big deal! After a few more calls, consulting the train schedule, we found a room in Deggendorf (the town that was 30 km further) and we happily exchanged 20 euros for a train ride to avoid getting caught in the rain and dark on our bikes. Some language struggles with the train officer, and a police escort across the tracks to the correct platform, and we’re in a nice hotel that overlooks the Danube back towards Straubing where we could see their fireworks. The whole thing felt surreal and Could 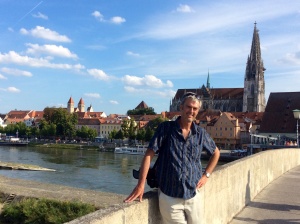 On the stone bridge (Roman) at Regensburg

be best described as walking into a Disney movie that is a cross between Camelot and Oktoberfest!