Leaving Bratislava lead us to Hungary….eventually. Eventually because the bike guide had us ride on top of a dike for 30 km before crossing a dam, down more dikes before finally going over a busy road bridge into Hungary on our way to Gyor (a pretty city that is quite prosperous due to the Audi factory and lots of dental tourism). At least the weather was nice but honestly, not a sign anywhere and no services except for a little snack trailer on the dam bridge. The trip from Gyor to next city (Komaron) was a nightmare ride worthy of the most advanced BMX riders. Most of the day saw us negotiate deeply rutted, and muddy tracks through farmers’ fields….and this was the official route. The “alternative” route, which we did part of, involved riding on single lane roads in traffic (no shoulders, no lines, & often, potholes with traffic brushing by very closely at high speeds). Took an extra day at Komarom because Stuart had to take the train back to Gyor to pick up the left-behind iPad cords and our last electric adaptor). By the time he returned, the weather closed in with rain. Komaron is ugly, feels like left behind in Soviet era, but it does have a gleaming new Tesco and the old thermal baths, which we made use of. The next leg to Esztergom was a lovely day, but did involve Michaela getting a flat on the rough shale-covered dike, and of course, being a Sunday, nothing was open. We ended up being assisted by a New Zealand couple in a tiny town in rural Slovakia (the bike route jumped to other side of river again). Esztergom was definitely a gem as we saw the imposing basilica from miles away. Today’s ride was probably one of our best days….many try to rush from Esztergom to Budapest in one day, but we had decided to split it into 2 and so we’re in Szentendre, a very picturesque, artist community, but also heavily touristed. Will explore tomorrow. The day was sunny, involved a beautiful bike path for the first half (riding with traffic for second half), two ferry crossings, and a steep, 30-minute hike up a rough track to Visegrad castle. The day also involved us taking a short swim in the Danube, something we have not had the opportunity to do, for various reasons, since the first day. Last stop before Budapest…..in just 20 km if the bike map can be believed! 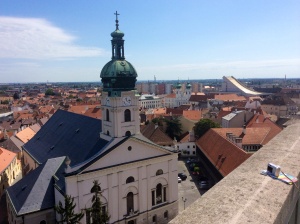 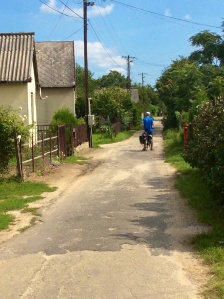 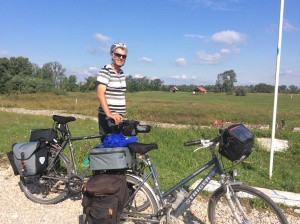 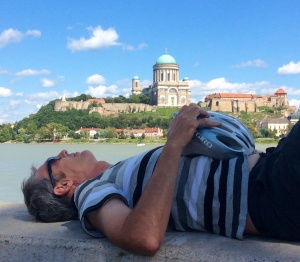 Esztergom from Slovakia side 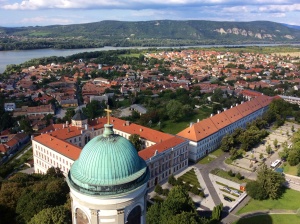 View from cupola of Esztergom basilica 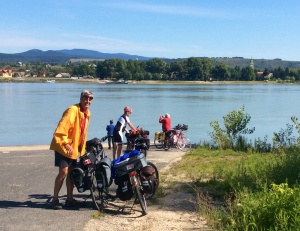 Waiting for ferry to Szob 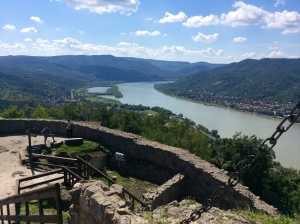