We arrived in the early afternoon after a short ride from Szentendre and were immediately struck by the size of the city. With almost 2 million people it contains 20% of the Hungarian population.  The ride in was simpler than most big cities as the route followed the Danube right to our hotel.  We stayed in the famous Hotel Gellert, which for almost a century has been perhaps the most prestigious hotel in the city.  The doorman didn’t sniff too much when we showed up in bikes.  The hotel is attached to a large spa/bath facility where we spent the afternoon sunbathing (very unusual to have the sun at all on this trip) with the only problem being that the outdoor pool was closed, a fact that astoundingly,  nobody thought important to point out.  Michaela had chocolate wrap/massage and I had a pedicure, notable for the fact it was provided by a man who was a dead ringer for the old guy in the film Oceans 11!!!

Pest from Buda at night 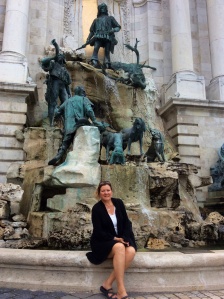 View over Danube to Parliament 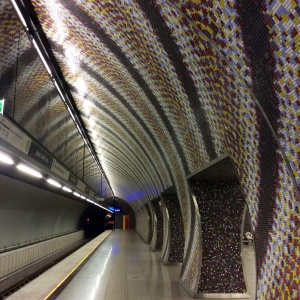 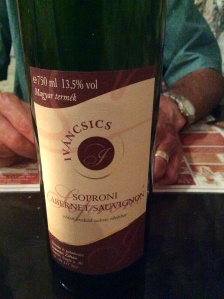 We climbed a bunch of tall things as is our wont, took in the views and studied statues of various famous and infamous Hungarians. The city is not as grand as Vienna, but better views (& significantly cheaper), and is a bit dressier than Bratislava.  Spectacular at night.

What isn’t easy is getting out of the city by rail with a bike.  We had hoped to get the night train direct to Konstanz but without prior reservations we were out of luck.  So after weighing our (limited) options, we embarked on a ten train, 4-day odyssey to get back, via Sopron (Hungary) and Munich.  This presented the downside of long distance biking: while it provides the traveller with flexibility, economy, and a great deal of satisfaction (usually) on the outbound trip, getting back is a hassle, especially in making tight connections.  While most countries have figured out that bicycles have wheels, as do wheelchairs and baby buggies, Germany hasn’t caught on and often connections required us to carry our fully loaded bikes up and down stairs.  This experience illustrated the good and bad side of the German psyche.  One train driver actually waited for two minutes when he saw our predicament, while a particularly officious crossing guard so enraged M that she called her Gestapo!

Bikes now returned to rental shop, doing laundry in Konstanz, and organizing our passage back to Vancouver.