Revelling in our arrival in Budapest after a 1350 km cycle trip, and treating ourselves to a real hotel, spa services, and very good food, we thought it would be easy to get the night train back to Konstanz (having previously checked into this) – WRONG!! Unfortunately, being a summer weekend, bike passage on the train needed to be booked far ahead. Seats were available, but not bike reservations. These trains take only a few bikes. Of course, we didn’t know our exact arrival in Budapest, so could not really pre-arrange a return trip. But it got worse – we were unable to get a train with our bikes anywhere in the general direction west. The train people recommended that we could go to Prague and then try for a train out of there. While we very much wanted to visit Prague (& Czech), we had decided that we’d had enough of biking, and we certainly didn’t want to take our bikes all that way and not use them (Prague is not a bike-friendly city). Also, Prague to Konstanz would have required multiple local trains. Boat passage to Vienna was also a no-go.

We decided that we would work our way westward on any trains that would take us and our bikes. In the end, we found ourselves first in Sopron – a lovely town west of Budapest virtually in Austria. In fact, this city voted not to join Austria in 1921 and are hence dubbed the most “loyal” Hungarians. It is also a city that was minimally harmed by WW2 so much of it’s buildings remain intact. The real reason Sopron was ignored by WW2 bombs was that it has no industry. Today, it is a popular holiday spot mainly for the Viennese and Hungarians who love outdoor activities and wine. We celebrated the eve of our 33rd anniversary in an underground restaurant/wine bar. Good, honest Hungarian, tasty food and excellent wine with delightful service set us back no more than the equivalent of $50 Cdn. Had the weather been more predictable, we would have readily cycled the 80 or so kilometres to Vienna with the hope of getting a train back to Konstanz.

Alas, we spent the next 2 days on 10 trains, with an overnight in Munich, before delivering the bikes back to Allensbach (near Konstanz) late on September 1st. Each country presented with it’s own virtues and challenges of travelling with bikes. Hungarian trains were old, so involved hoisting our bikes through narrow doorways and up 3 stairs to a bike car, then taking the bags off so the bikes could be hung from ceiling hooks. On the plus side, the rail staff and complete strangers were more than willing to help us. Austrian trains were lovely – modern with flush entries, we simply wheeled our bikes onto the trains. The stations routinely had elevators for getting to platforms without the need to carry bikes up and down stairs. German trains were mixed. Many of the trains were tight transfers that involved carrying our laden bikes down stairs and up stairs to another platform. The worst were the last 2 as we approached Konstanz. In one instance, the train driver saw our predicament, and waiting an extra five minutes while we transferred our bikes. Each bike required both of us to get down and up stairs, and then onto the trains, some of which involved stairs and then tight manoevering on cars. In another instance, with only a couple of minutes to get to the next platform (in a very small station), we saw a station worker push a wheelchair passenger across the tracks (on a designated crossing) to get to another platform. So we, along with a passenger with multiple bags and little German, tried to do the same. Well this woman literally screamed at us that “vee must take ze stairs”! No offer to help us do so, and no good reason given for why we couldn’t simply cross one set of tracks on the designated crossing. She physically blocked us and continued to yell at us to take the stairs. Luckily, this was the last transfer, but we were already exhausted….and now furious. All for a 20-minute ride.

The bike rental shop is about 1.5 km from the Allensbach train station, uphill! But we didn’t mind – it actually felt good to ride again after being off saddle for several days. We briefly considered extending the bike rental another week and doing a small trip from Konstanz. We probably would have but the plane gods had other plans as we started scouring the options for returning home. Until the end of September, there ended up being little choice, and virtually nothing at all for our target date of September 15th. Of course, we were also avoiding flying through the USA, so focused on flights to Vancouver via any European city or London. We ended up finding an inexpensive flight from Zurich to Vancouver (via Frankfurt) for September 6th and booked it. That left us with just 5 days to spend time with our friends, and to visit Mom’s friends near Karlsruhe, which had promised to do. We spent one day driving there for lunch and back in a rented Audi that allowed Stuart the thrill of driving the autobahns at 200km/hr!

The day we left, Renate kindly drove us to the Konstanz train station, where we took the 1-hour long ride to the Zurich airport, followed by a short flight to Frankfurt, and the long 10-hour flight to Vancouver.

The first week home was a blur as we spent most of that time re-acclimatizing to our time zone, our empty condo, and the reality of  having to re-group and make new plans going forward. Four weeks onward, we have done a lot–visited with family, filled our calendars with work tasks, re-invested much effort in research (Michaela) and in started a new business venture (Stuart), as well as a quick trip last week to Vegas to help Jane celebrate her 50th. We have divided our time between Penticton and Vancouver and have not yet unpacked more than we have needed. We have enjoyed glorious weather to now, so have only now felt the pull to deal with fall and winter by unpacking jackets and closed shoes. We have also started running again, largely because we are doing the Okanagan half-marathon tomorrow morning (signed up for last Spring). Initially worried about not having run for months and wondering about the effects of much biking, we were pleasantly surprised how easily the running legs came back. We certainly won’t be running for speed tomorrow, but hopefully, we have trained just enough to avoid pain and a difficult recovery.

We haven’t yet dared discuss the next possible adventure! 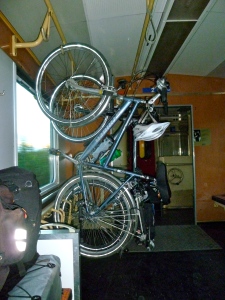 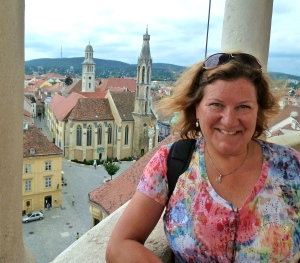 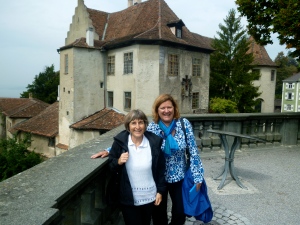 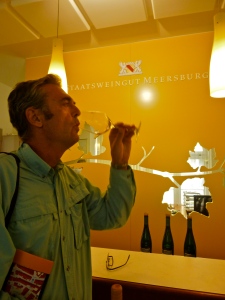 dinner with the Schmitz family the last evening

One response to “Overdue Finale”