Ahhh, New Mexico…a state that kinda defies description. It embodies some of the independence of Texas, a strong Mexican influence (50% of the state speaks Spanish), and the artistic quirkiness of Arizona. The southern part of the state is quite rural, and yet is quite reminiscent of B.C. with the mountains and valleys. We even encountered snow as we drove through Silver City heading west. As the state is at higher elevation overall, it is much colder than the south of Texas or Arizona to the west. Night time temperatures reach freezing. Where else can you combine caverns, aliens, and skinny dipping in the desert?

Carlsbad Caverns National Park:  a strong recommendation from us to visit these caverns if anywhere near. There is no charge to visit and the self-guided walk takes 2-3 hours depending on whether you descend through the natural opening or take the elevator down 80 stories to the big rooms. Limestone formations of every kind such that one finds themselves looking for figures and shapes as if watching clouds. Each room seems to emerge more magnificent than the last. [In the summer, this is the place to watch the largest bat flights at sunset.] 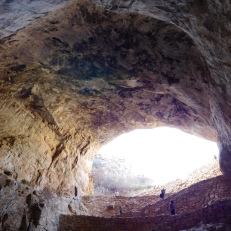 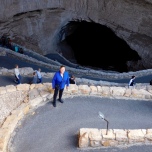 Roswell:  while initially skeptical, we found the International UFO Museum highly informative, with comprehensive information, documentation, and publications about the 1947 event that made Roswell so well known. In our minds, it would be difficult for most people to remain skeptical after spending some time with the data on hand.

White Sands:    Stuart was really hoping to be delayed… 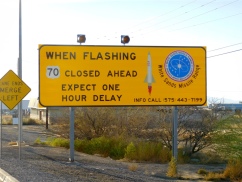 …instead, we got a chance to play in the white gypsum sand dunes just before sunset, as the sky changed its palette while the children got in their last dune slides for the day. 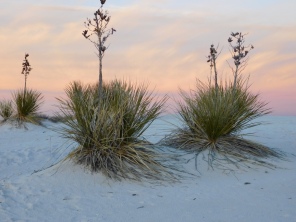 Silver City:  a cool town that reminded us the West Kootenays with its blending of cafés, brew pub/distillery,  crystal, health food and “up cycled” goods shops, all with a western hippie flair. The surrounding mountains with snow at the sides of the road made us feel right at home. (Oh, also the home site of Billy the Kid).

Faywood Hot Springs:  and what to our wondering eyes should appear, but a rustic old hot springs in the middle of nowhere. Literally, in the middle of the New Mexico desert, 30 miles from the nearest town, with a nondescript entrance on a rutted road, lies Faywood Hot Springs. With campsites and cabins, and 15 pools of water ranging from 100-108 degrees F clustered in groups of 3 with privacy fencing. Clothing optional. With very few people there, we took advantage of a set of pools to ourselves for a night soak under the clear, starry skies, with a definite night chill in the air. To be repeated the next morning, where in the light of day and joined by three others, we earned our naturist creds.  The property also has its own henge with a reclining bench for star-gazing, and a mandala to walk through. 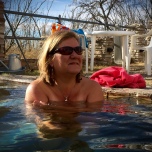 And those skies…always defy description! We will definitely be back, NM.

One response to “New Mexico: Curiosities”