While the Dempster Highway has been around a while, in late 2017, the Tuk highway was opened, a road that connects Inuvik to the Arctic Ocean at Tuktoyaktuk. Probably Canada’s most expensive road and the only road in Canada that gives access to the Arctic Ocean. (Even the Dalton Highway in Alaska stops short of Arctic Ocean access unless you’re an oil worker at Prudhoe Bay)

The Dempster Highway: 750km of dirt/gravel road from just outside Dawson City, Yukon to Inuvik, NWT. The driver is subject to ever-changing road conditions due to weather. When it rains, which it did when we drove north, the road surface “liquifies” into deep mud and water-filled potholes. The mud is unique as well as it is clay-like in quality so as to encase your vehicle and feels like cement when it dries. When it is dry, as it was for most of the drive south, it remains a mostly rutted road with enough “smooth” gravel sections to lull you into a false sense of being able to drive faster only to spring a newly dried mud ridge or series of potholes to wake you up. When dry, it is also very dusty, especially when passed by faster or bigger vehicles. 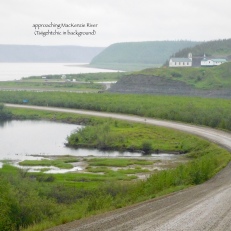 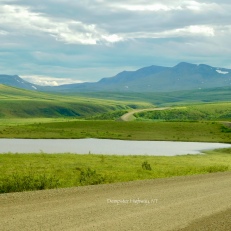 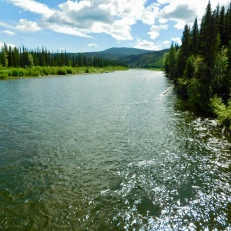 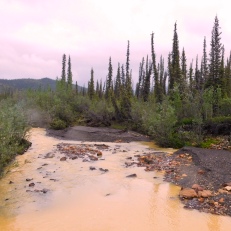 2. Those skies! The ever-changing weather through the mountain ranges provide for a panoply of moods all around. 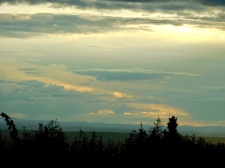 3. There are 2 cable ferries: one crosses the Pelly River, the second crosses the MacKenzie River (the 2nd largest river in North America and drains 1/5 of Canada’s land mass). These ferries go into operation after the spring break up and stop operating during fall freeze up. During these times, the communities are cut off by road, about 4-6 weeks each season.

4. Fort McPherson is a small aboriginal community between the two ferries but for some mysterious reason, has the cheapest gas (not that gas is particularly cheap anywhere in the north). This little community also has the graves for the Lost Patrol, a Canadian historic tragedy (Michaela first heard about it from her dad).

6. When you cross the Arctic Circle, you are only half way there.

7. At the end of the Dempster Highway is Inuvik, the “big city” up here. Actually has a population of about 3500, mostly aboriginal (Inuvialiuk and Gwichin). Home of the famous Igloo Church which had a very interesting tour. 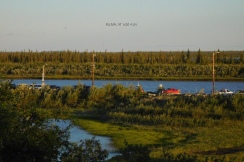 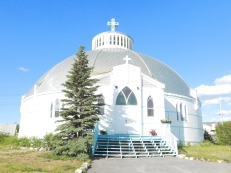 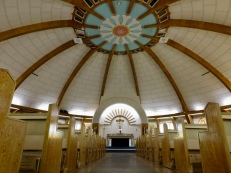 Inuvik’s Canada Day celebrations were traditional:  a small parade, mayor’s speech, live music, hoisting the flag and singing Oh Canada, everyone in the park in red & white, with cupcakes, burgers, and hot dogs all provided, games for children, and the youth selling snacks as a fundraiser for school trips. And a gentle reminder of where we are… 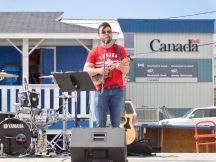 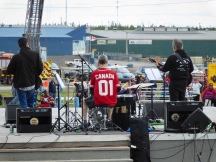 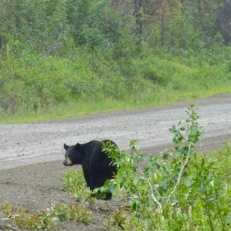 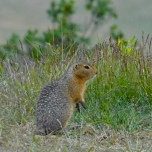 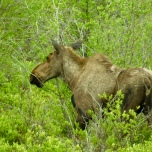 The Tuk Highway:  probably Canada’s most expensive road that connects Inuvik with Tuktoyaktuk via a 150km gravel road built on a berm over permafrost. It just opened in November 2017 and is work in progress, requiring serious seasonal work each year. They are still working on building pull-outs/rest stops. This is the MacKenzie delta and now makes it possible for tourism to reach a previously remote community without services for tourists. They do not yet know how they will be changed but are optimistic that it will be good for them. Tuk is expected to receive 10,000 tourists this summer alone, whereas previously, the only tourists were those who flew in from Inuvik or beyond. How they manage the upcoming changes, for better or for worse, would make for an excellent sociological or business study. 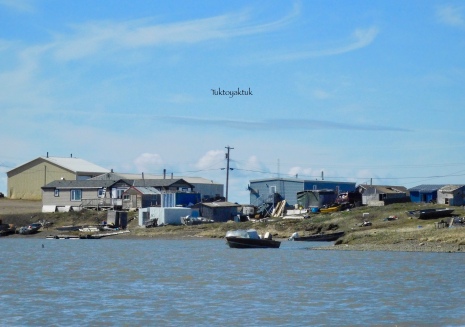 2. Tuktoyaktuk is the fastest eroding community in Canada. For now, if fully self-contained, one can camp on the “point,” right on the Arctic Ocean (“for now” because the point is eroding quickly, and they have yet to find a good site for a campground).

3. Pingos are difficult to access. We hired a local with a boat to take us to the Pingo National Landmark, where Parks Canada has supposedly built a fancy 400m boardwalk (to protect the fragile terrain), but the erosion means the bays and channels are filling up with rocks, making it too shallow to access. Our guide was only able to get us to a nearby bingo, which we walked around, feeling very much like we did hiking the tundra in Denali NP.

4. Really great cellular service in Tuk. Maybe due to the DEW station? Or the huge satellite dish?

5. Bring your own water! When the water filling station isn’t working, there’s not much incentive to get it fixed. And there is no ice to buy.

6. The Arctic Ocean is chilly, but not much more than the Pacific at Tofino. Five days earlier, this water still had ice. 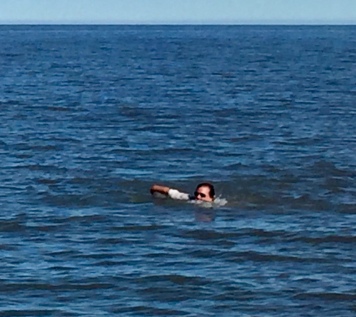 7. Wearing sunglasses at night. Sunshine all night messes up your sleep/wake cycles. It is hard to go to bed, and many simply don’t during these weeks. Had to learn not to wait until dark to make fires.

Finally, we are further from home than we were in Los Cabos, Mexico. Next post will highlight the 3,650 km to home.