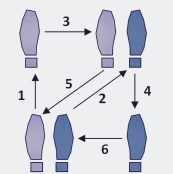 Box Step is a basic dance step named after the pattern it       creates on the floor, which is that of a square or box. It is used in a number of American Style ballroom dances: Rumba, Waltz, bronze-level Foxtrot. While it can be performed individually, it is usually done with a partner. This is the most common dance step in the Waltz.

After the ups and downs highlighted in the last post, we expected June to be a more productive month. We are characterizing the last several weeks as the “box step”–25% back-steps, 50% side-steps, and 25% front-steps. We’ve also been told that THIS is the most difficult stage of construction as a myriad of tasks need to be completed before the structural inspection happens. This inspection includes completely installed windows and exterior doors, all interior framing, all plumbing and electrical rough-ins, and all HVAC installed. When this inspection is completed, the house is considered at “lock-up” and the work moves to the last stage of “finishing.”

“Mistakes will be made” – we’ve heard this from many who have undergone major renovations and/or home building as well as from our designer and builder. And everyone has made mistakes!

In the picture directly above, you will notice a structural beam. Well, this beam was mis-measured which resulted in the wall next to the fridge being too deep (where fellow in green shirt is on ladder). This would restrict the fridge door to open only to 90degrees, so not functional (and was not in the the plans). So, the beam had to be moved, which was an easier fix than replacing the beam, and now it will all work out for the kitchen design. [carpenter mistake]

The windows that did arrive in May were duly installed. Three windows and our sliding doors were on back-order as the manufacturer of the special glass for passive house solar windows was out of stock. These back-ordered items did arrive by mid-June as promised. After reinforcing the sill structure for these heavy sliders, they finally get installed. [builder mistake]

waiting to be installed

Our front door is now installed but we’re still waiting on the handle. First handle chosen was discontinued, the second wasn’t going to fit the frame, and the third one will arrive soon. This is where we made a mistake by approving the wrong colour for the exterior door cladding. This will get remedied…later. [our mistake]

The guys are expanding the corner window opening after discovering that the window, when finally delivered, was too large for the opening. Even professionals make silly mistakes when they review shop drawings! [designer mistake]

[Our back door is coming from a different supplier, and is also back-ordered. Also a miscommunication in the ordering process, but should be here shortly.]

While S is anxious to see the garage door arrive, it won’t be installed until the major work is done and equipment removed. The doors and windows will be protected to avoid damage during all the comings and goings of materials and workers. Above the garage is our rental suite. We learned that there is some variation in interpretation of building codes between cities. In Penticton, the sliding doors cannot be installed until the balcony deck vinyl is installed. So, we’re waiting on the arrival of the vinyl which should be here this week. [City of Penticton mistake] 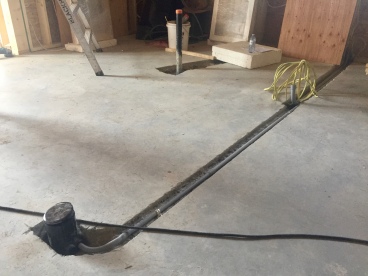 Why are there two trenches cut into our beautiful, smooth, concrete slab foundation? Well, this happens when a) a plumbing stack’s placement has been mis-measured, and b) when electrical has been missed. We were “lucky” on both counts.  The plumbing stack needs to moved into the kitchen island base and not in the aisle, and electrical needs to be brought to both the island and into the open area living space. [plumer and electrician mistakes].

Progress – there ARE forward steps in this dance.

Electrical panel main and sub boxes are in and the wiring is mostly complete. Of course, some of the wiring will need to be moved as other things are changed or as we expand the number of lights or outlets.

Extensive duct work is installed for the HRV. The actual unit is sitting in a box in the middle of the room and should be installed this week.  Here is a short video about the ventilation system in a passive house:  PH Ventilation 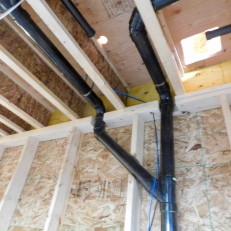 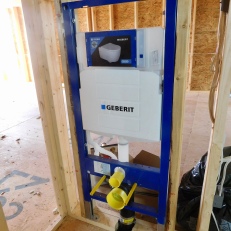 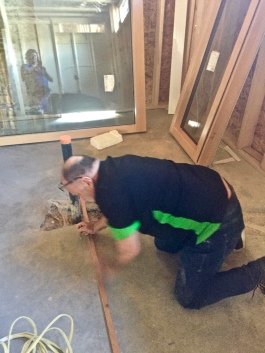 Also, there’s Ben, our cabinet maker, drawing out the kitchen island and measuring everything….twice! while we make design decisions on the spot.

The drainage is installed and the rock and sand infill is being levelled in preparation for driveway concrete (at a later time).

Behind the scene, there has been, well, us….continuously having to make decisions both large and small.

Following countless hours of internet research, numerous visits to suppliers throughout the Okanagan and even in Vancouver, endless discussions between us, with professionals, and with friends who have built/renovated, even middle-of-the-night “ideas,” many things have been decided:

Things that we still have to decide or finalize: 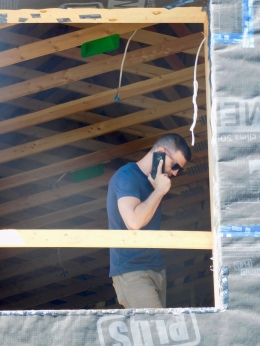 And our main guy, Mike! He is spread so thin that we are happy to hear he has just hired an assistant project co-ordinator. Yay!

On particularly stressful days, when we learn of a mistake or have to chase down information or products, when trades don’t show up for work or are pulled away to other projects, when it seems like the cheques go out quickly while everything else is slow or stalled, we take comfort in the hopeful verse of Eric Clapton (sometimes with a bottle of wine):

All we do is weep and moan
Trying to build ourselves a home
There’s no shame in trying, there’s no use denying
Everything will be alright