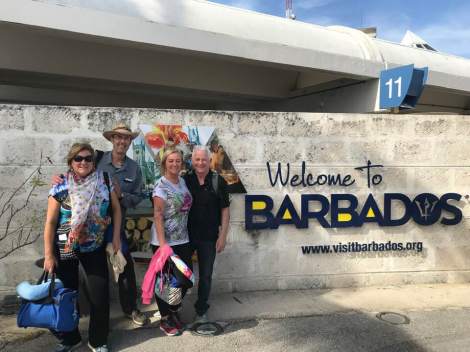 M’s sister has been nurturing a childhood dream to visit Barbados, so when the opportunity to share a house rental came up last year, and always up for visiting a new part of the world, we joined her and her husband for a 3-week trip. Why almost 3 weeks, you ask? Well, getting to this island nation in the southern Caribbean is no easy feat from the western part of Canada. To get there, we took an overnight flight from Kelowna to Toronto followed by a 6-hour flight due south and 4 time zones away from home. Our return trip was even more challenging, involving 3 flights [Barbados-Toronto(overnight for us)-Calgary(overnight for them)-Kelowna].

Upon arrival, we rented a car to make the supposed 15-minute journey to our destination. Barbados, as a former British colony,  retains driving on the left side of the road. Having previous experience with this, S became our designated driver. However, Barbados does not use house numbers for addresses, just the name of the hotel or building on the street in a parish. Many house names, however, are not visible from the street, and as was our case, there were two houses with the same name in the same parish. Hence our 15-minute journey turned into over 90 minutes as google maps sent us to the wrong “Seagaze.” Our host finally met us and escorted us to the right place, and we wearily unloaded our luggage and settled in just before sunset.

In no particular order, our Bajan experience follows:

A 2-bed/2-bath upper floor of a house had the sea just a few feet below us on one side, and the main road with bus stop at the end of the driveway on the other. We spent many hours on the balcony or on the beach below us. The sound of the surf was ever-present, and occasionally thunderous.

The Barbados Museum & Historical Society:  we all learned a lot at this excellent museum, from the history of the island with 3 distinct waves of settlement before it was “discovered” (i.e. occupied) by the British in 1627, through its Slavery period (sugar plantations), to it’s Emancipation era (revolt in 1816) and the modern era of Independence (1966). 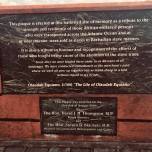 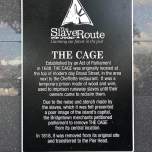 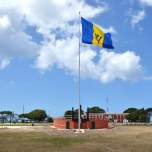 This was augmented by visiting St. Nicholas Abbey. It started as a sugar plantation in 1658 and after having been sold and bought several times, has been faithfully restored and now produces single-plantation rum (starting at U.S.$100/bottle). It is one of only 3 remaining intact Jacobean houses in the Western Hemisphere.  With its period furniture & decor, our tour guide gave us a thorough history of its founding, it’s operation through multiple ownerships, and its importance to the Bajan economy. We were able to sample the rum after observing the sugar cane processing that still involves intensive human labour as the sugar cane must be hand-cut & fed through the press. [Minimum wage in Barbados is $6.25/hr but seasonal agricultural workers are paid by the day]

At Foursquare Rum Distillery & Heritage Park, we received a thorough education on the central importance of the rum industry in Barbados from the 5-generation Searle family distillery that now produces many labels not available in Canada [Mt. Gay rum is also excellent but is readily available in Canada–now owned by Remy Martin group]. Little known is that rum was an accidental by-product of the sugar industry. As we found ourselves at Foursquare before noon, we enjoyed an unexpected private tasting by a very knowledgeable and entertaining young lady. Needless to say, we enjoyed some of their wares for the rest of our vacation and brought some home! 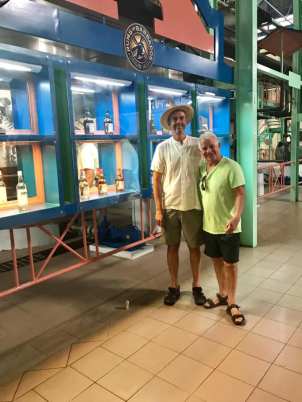 Bridgetown:  Bridgetown and its Garrison was granted UNESCO World Heritage Site status in 2012.

The World Heritage Center says it is an “an outstanding example of British colonial architecture consisting of a well-preserved old town built in the 17th, 18th and 19th centuries, which testifies to the spread of Great Britain’s Atlantic colonial empire. The property also includes a nearby military garrison which consists of numerous historic buildings. With its serpentine urban lay-out, the property testifies to a different approach to colonial town-planning compared to the Spanish and Dutch colonial cities of the region which were built along a grid plan” whc.unesco.org/en/news/770/

Speightstown (aka Little Bristol):  this is the 2nd largest settlement (1630) and was the original main port of Barbados. It boasts original Bajan architecture, remains a fishing centre, has quaint streets filled with produce sellers and chickens on the loose, and has some excellent beaches.

Oistins: this was “our” community, about a 15-minute bus ride south of Bridgetown. A 10-minute walk from our place took us to the Fish Market where we frequently bought fresh fish for our dinners (mahi-mahi, king fish, flying fish, marlin).

However, Oistins is best known for its Friday night “Fish Fry”–a raucous, crowded, weekly event that draws locals and visitors from all over the island. Essentially, a series of stands next to the fish market where you line up for as much as 2 hours (while drinking & chatting to people from mostly England or Canada) to have a dinner of grilled fish from a styrofoam container on a picnic table (if you’re lucky), while being entertained by a Bajan music trio and dancer with a tabletop butt, followed by perusing the local craft stands and/or dancing on the lawn by the beach to multi-era music (either live or by DJ).

Inland:  some random scenes from the inland sections of the island during our excursions around the island. We stopped at St. Andrew’s church, Earthworks pottery centre, Morgan Lewis Sugar Mill, a viewpoint at Gun Hill Signal Station, and a view from Cherry Tree Hill.

St. Lawrence Gap:  this is the centre for nightlife and is especially geared for tourists. This area stretches between Oistins and Bridgetown. It consists of many restaurants, bars, and nightclubs in the Gap proper, and the well-known Accra beach (Rockley) punctuated with hotels, shops, and multiple beach clubs. On separate days, we partook of happy hour and a long walk along the beaches between the Garrison and the Gap. And where S & L almost got washed out to sea!

Other than locally grown or produced food (e.g., sweet potatoes, breadfruit, limes, green beans, bananas, fish, pork, poultry, sugar), everything is imported. And this is the reason for travelling with more luggage than normal. M’s sister knows several people who vacation in Barbados frequently and for extended periods and we were glad we took their advice to heart. Their main message was to fill our suitcases with non-perishable food stuffs (e.g., coffee, tea, peanut butter, mayonnaise, condiments, spices, etc.) as the groceries with which we are familiar are very expensive. And they were correct. Even the perishables that we could not bring along proved to be pricey (e.g. US$7.50 for 1 pound of butter). In the examples below, Barbados $2 = U.S. $1: 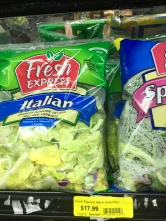 By extension, eating out is exceptionally expensive and we happily found ourselves preparing most of our own meals (fresh fish from the local fish market, chicken, salads, roasted potatoes) and enjoying them on the balcony overlooking and overhearing the surf a few feet below us. Of course, accompanied by either Banks beer or rum or ginger beer or some combination thereof. Often followed by card games until we couldn’t stay awake any longer. In the mornings, we often enjoyed the local coconut bread with our coffee. 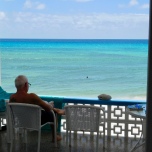 One of the best eat-out finds was a simple fish cutter (sandwich) stand on the beach:  3 choices, fish cutter with cheese, without cheese, or just cheese. And a Banks of course.

A steal of a deal is the local transportation: “meep meeps” (or “beep beeps”). These large vans, individually owned and operated, run almost continuously around most of the island, especially the busier west and south areas. We made frequent use of these Bd$2 rides where the music is crazy loud, the driver’s money guy crams you in, and you close your eyes as they tear through the streets with sudden stops or even back-ups to pick up somebody emerging from a side street. Fold-down seats besides the benches means that at most stops, a few people need to leave the van for others to get out, then they hop back in and off we go again. There is no schedule and one can ride a couple blocks or all the way to the city. When we wanted to go cross-island exploring, we rented a car for the day.  For a short video click here.

The sea was definitely the main feature of our trip. From the 24/7 sound of the surf directly outside our windows, to beach walks and playing in the waves, to a catamaran/snorkelling trip up the coast, to sitting in the rock pool on the Atlantic side, to diving the wrecks in the Marine Reserve, we were mesmerized by the ever-changing vivid blues and greens of the warm water. 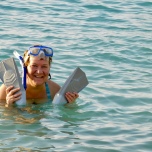 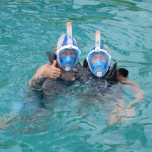 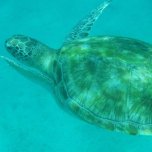 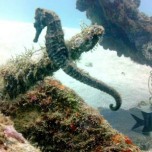 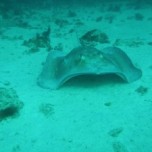 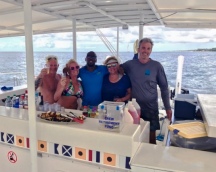 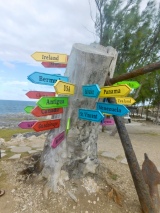 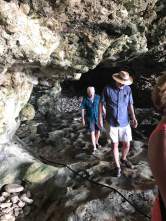 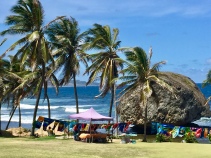 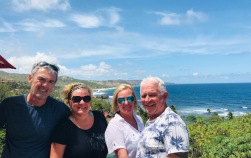 Each day presented different skies, but the best were seen from our balcony or our beach. Top row:  sunrise & storms.  Bottom row:  sunsets. 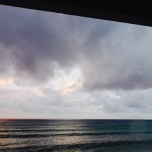 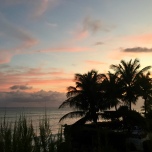 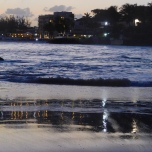 We registered and completed a very challenging 6-km run in support of children’s services in Barbados. This event was in its 3rd year, co-sponsored by RBC Bank and the University of West Indies, Cave Hill. As we had not trained (much) due to the snow at home, we figured that a 6km run could not be too difficult and it was for a good cause. We took a taxi to the University campus for a run that was to start at 4 p.m. on a Sunday (temperature about 29C) and found ourselves in the company of predominantly young and spry students and a smattering of mid-aged visitors in the running group (families and most older participants went into the walking group). The run started uphill and continued uphill for 5 of the 6 kilometres. However, the views were spectacular!

The second charitable activity was trying to get our bag of excess first aid supplies (from our move, we found a large box of surplus tensor bandages, gauze, etc.) to a community service organization. We had learned ahead of time that medical supplies are sorely needed for either medical training (Barbados is home to several medical schools) or for low-income citizens. We planned to take our supplies to the Salvation Army in Bridgetown. But without street addresses, we only had a vague visual from a map as to their location. In downtown Bridgetown, we approached a local police officer for walking directions and after trying to describe the route, he instead put us into a patrol car and took us there! Two white tourists in the back of a marked car through the back roads of the most desperate areas of central Bridgetown definitely drew plenty of looks from the locals. At the end of it, however, the Salvation Army office was closed that day (of course, not noted on their website or in their message to us), and we walked out of that neighbourhood following police advice to “be careful.” 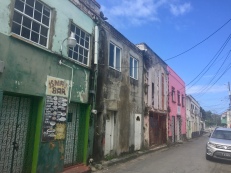 To be honest, they police did offer us a ride back to the harbour, but we were heading to the Saturday market at Cheapside anyway, just a few blocks in another direction. [We ended up leaving our first aid supplies with the house-cleaner whose niece would take it to the nursing school]

Having almost 3 weeks allowed us to achieve a balance between days of exploration & activity and days of simply hanging out at our beach/house. We are grateful to have had the opportunity to travel together and create lasting memories. Cheers!