Once again detouring away from the Alaska Highway, at Tok, we headed south, first to Valdez and then to the Kenai peninsula. Our longest drive to date was from Valdez to Homer (800km) but the alternative was waiting a few days for a $500 ferry ride between Valdez & Whittier. We know where Alaskans go for vacation, and for all manner of outdoor activities. The south central coast is the playground of Alaska, with boating, fishing, hiking, beach combing, cruising, cycling, bird-watching, rock-climbing, and just about anything else that involves the outdoors. Some of it is easily accessible while much of it is very difficult to get to:  for example, in Homer, most of the hiking is on the Kachemak peninsula which involves either flying or chartering a boat (at great expense). Hence we saw many RVs with boats in tow. Good, paved bike paths were found in both Valdez and Homer, and there are extensive bike paths throughout Anchorage as well (although today, as I write this, we are socked in with rain).

On the way to Valdez, we boondocked on a side road near Chitina, and with the arrival of several people with fishing gear, learned that the Copper River salmon opening was for noon the next day. This is for Alaskan residents only, but apparently is a big deal, as people come from all over the state to set up their campers and boats on the banks and gravel bars. The local natives absolutely rely on these salmon run openings. Along the way, we also saw a moose mom and 2 babies, and the famous trumpeter swans that fill these waterways. The Thompson Pass was stunning on the way down, and completely blanketed in snow on the way back a few days later. 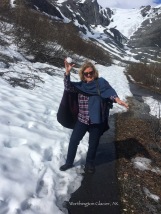 Valdez is known as “Switzerland” and it was easy to see why. However, we found this descriptor to apply just as well to both Homer and Seward. Valdez is also the terminus for the Trans-Alaska Pipeline, where the crude oil is loaded onto tankers, and where there is a refinery for the gas going onto trucks. The harbour has mostly recovered from the Exxon Valdez tanker spill (1989), with otters frolicking in the waters and a local fish hatchery, but the programs in place now to prevent and/or respond to any future spills are extreme (such as 3 or 4 pilot boats for all tankers, and dealing with only one tanker at a time). Very pretty location when it’s clear; when its socked in with fog/rain, you wouldn’t even know the mountains are there. A non-touristy, somewhat funky harbour with boardwalk made for an excellent local vibe where we indulged in halibut tacos and sushi. 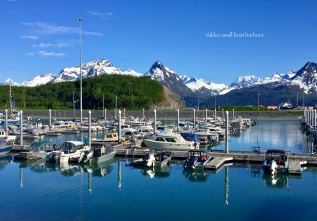 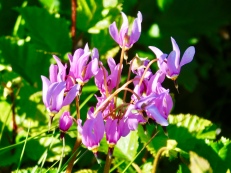 Our adventure in Valdez was a boat trip to the massive Columbia Glacier in Prince William Sound. An all-day event that took us around Glacier Island (Stellar sea lions, puffins, eagles, otters, seals) and then to 1/4 mile from the glacier terminus. It’s hard to capture the enormity of this glacier, that has receded by about 6 miles since 1979, but we were close enough to witness and hear the glacier calving and the tinkling of the bergy bits as they floated around the bay.

Homer offered us another opportunity to explore by bicycle. We camped on the Homer Spit that juts out about 4 miles into the bay, and where most of the business is about fishing charters. We did score a swim at the local indoor lap pool before driving out to the “Old-Believers” communities (Russian orthodox) with a wonderful panoramic view, visiting the local brewery, and ending up at a local farmers’ market that is just getting started up for the season. 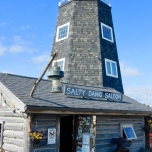 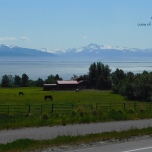 Our last excursion in these parts was the spectacular Harding Icefields hike, at Exit Glacier, in the Kenai Fjords National Park near Seward. This was our longest hike so far, but possibly the most fun as we had a picture perfect day, and more than half of the hiking was in deep, mushy snow, which meant we could kind of “shoe-ski” coming down. (We weren’t brave enough to pull out the foil emergency blanket and slide down as some of the younger folk were doing.) This hike took us to over 3500 ft and actually above the Exit Glacier. We hope our boots dry out before the next bout of hiking. 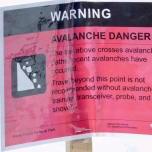 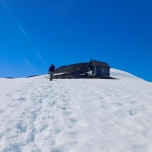 On a clear day (not today)