The Alaska Highway took us as far as Carcross, Yukon (having seen a brown bear en route) when we decided to detour once again as we dipped south into the coastal towns of Skagway and Haines. 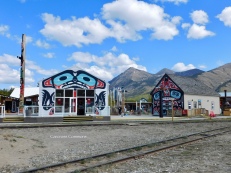 Going to Skagway meant driving through the Chilkoot and White Passes, first through the Yukon, then through B.C. before crossing into Alaska at the summit. We were totally unprepared for the sparkling, dramatic beauty of the jagged, white-topped mountains, and the still-frozen lakes and moon-like landscape near the summit. (apparently, many from Whitehorse have summer cabins in this area) 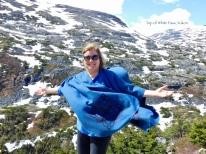 We arrived in Skagway on a “2-cruise ship day” which meant a relatively quiet downtown. (Apparently, best to avoid Skagway on a 4-cruise ship day!) The downtown area of Skagway is full of restored historic buildings and is largely framed around the Kondike gold rush of 1898 and mainly serves the cruise ships. The population is only about 1,000 people yet they can have 10,000 people pouring off of cruise ships on any given day. It is also the terminus of the Yukon-White Pass railway, one of the few remaining narrow-gauge railways in the world. It wasn’t running when we were there due to a mudslide somewhere along the tracks. The first campsite was waterside right next to the harbour and the cruise ships. Our only beef with these Alaskan coastal towns is that given that the residents mostly access their needs and services in Canada (Whitehorse), and that they are so heavily supported by Canadians, there is almost no-one that will accept Canadian currency. Yet, they expect Yukon to readily trade in U.S. dollars. Not very reciprocal.

We pulled out our bikes to explore beyond the townsite (on a 4 cruise-ship day), riding out to the Gold Rush Cemetery and Reid Falls, then crossing the river for some trail riding and hiking out to a viewpoint.

The second campsite was on the Dyea flats at the next inlet, accessed by a gravel road and is by the Dyea historic site (including the landslide cemetery). A great place for modern prospector Stuart to have a nap. 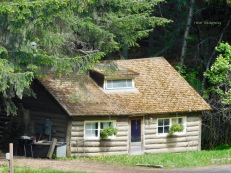 Lest y’all think we’re only fair-weather hikers, we braved a 4-mile hike on the Chilkoot Trail in the rain with bear activity all around us. I guess our bear bells worked as we never saw any bears on the trail, just fresh evidence of their presence! 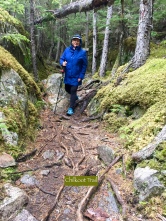 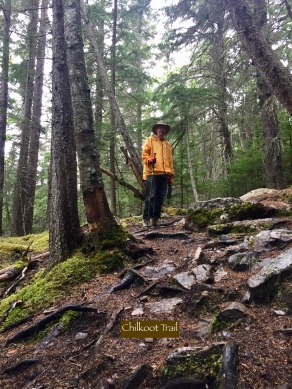 We took the ferry from Skagway to Haines: the boarding procedure would make a super comedy film and makes B.C. Ferries look highly slick and efficient. An hour’s ferry ride took us to Haines and felt much like landing on a Gulf Island, except for being ringed by high, jagged, snow-capped mountains.

The vibe of Haines was also like the Gulf Islands, much less touristed, and somehow, more authentic for what is primarily a fishing area and a staging area for the Chilkoot Trail. Apparently, they see a large cruise ship only once a week; most of the “cruisers” come by very small, yacht-sized boats. 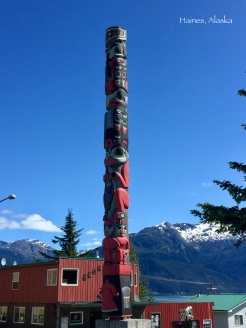 Having an oceanside campsite once again, we experienced late night sun-tipped mountains and large, butter-tender shrimp caught that morning.

We explored by van, with a short walk along a point that was full of wildflowers…

…and explored by bike with both morning and evening excursions around each side of the bay.

There was also the historic Fort Seward site that is now both a cultural centre (totem carvings etc.) and a working area but without the restorations of more touristed areas. 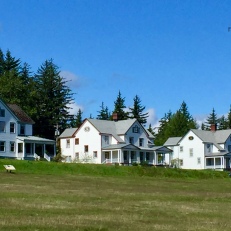 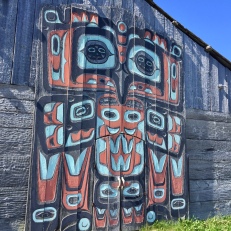 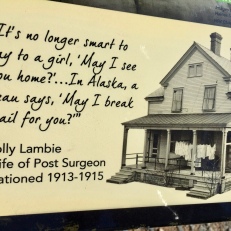 Along the Haines highway back to Canada, we first stopped at the Klukwan First Nations community for their cultural centre, but being a Sunday, it was closed.

Then on to the border (first B.C., then Yukon) where there must be very little traffic as we had about a 15-minute conversation with the Canadian border guard, a lady from Langley, B.C. As we drove up through the pass, we experienced a continuous corridor of white-capped, jagged mountains on our way to Haines Junction. 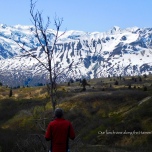 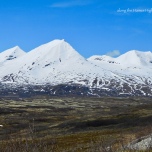 One response to “Dipping into Alaska”